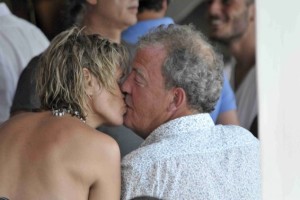 BBC TV show “Top Gear” host Jeremy Clarkson was spotted enjoying a day by the beach along with Phillipa Sage in a Greek island while on holiday. The couple were spotted sharing a romantic moment as they were seen sharing a kiss while sitting at the beach side restaurant. The pair were accompanied by friends who joined Phillipa for a dip in the sea. Sage showed off her figure in a black & white stripe bikini. Greece. 22nd August 2013.
©Exclusivepix

View all posts by alessandro →